Community members gathered on Saturday, June 18 at the Horwitz-Wasserman Holocaust Memorial Plaza on the Benjamin Franklin Parkway in Philadelphia for a Pride Havdalah program to learn about and commemorate the persecution of LGBTQ+ individuals in the Holocaust. 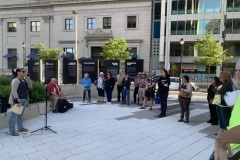 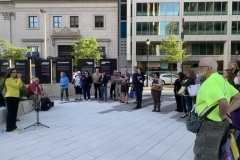 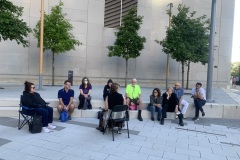 The event featured small discussion groups led by subject area experts on historic and current themes related to LGBTQ+ experiences during and after the Holocaust. The event concluded with a beautiful Havdalah ceremony, marking the conclusion of the Sabbath.

Organized by the Philadelphia Holocaust Remembrance Foundation (PHRF), Congregation Rodeph Shalom, and JProud – a program of Jewish Family and Children’s Services, and co-hosted by Jewish Graduate Student Network, the event served as a symbol of the community’s commitment to never forget the LGBTQ lives lost in the Holocaust and to seek equality and inclusion in the United States and around the world.

D’var Torah: When the truth is found to be lies: The Coen brothers’ Rorschach for serious people

I learned about Jewish spirituality in a yoga class in 1971. I lay prone on the carpeted floor, relaxing after achieving the challenging Bridge posture for the first time. I had thought that the pose’s [Read more…]