TV Show is in the player below or on the Roku streaming service on your smart TV. You can add the Jewish Sacred Aging TV channel to your Roku streaming subscription by visiting this page: https://channelstore.roku.com/details/600964/jewish-sacred-aging.

Listen to the audio podcast in the player below or subscribe using your favorite podcast platform. 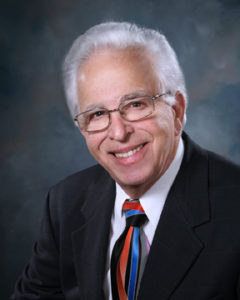 Rabbi Roberts led Temple Emanu El for more than 35 years. An expert in the field of bereavement, Rabbi Roberts often lectures locally, nationally and internationally on death and dying. He holds a doctorate in this area and is certified as a Fellow in Thanatology. He is currently treasurer of the national Association of Death Education and Counseling. He is currently working on a book about the mourning that some go through when they retire from the work force. Rabbi Roberts is committed to educational programs especially for our youth. He frequently uses storytelling as a means of teaching and communicating with children and adults. Rabbi Roberts has spearheaded the production of a multi-media presentation on teenage suicide entitled “Inside, I Ache.” He served on the National Committee on Teenage Suicide Prevention was a board member on the Ohio Suicide Prevention Foundation. He is a past president of the Heights Interfaith Council and the Cleveland Board of Rabbis and remains active in both organizations. He served on the national Rabbinic Cabinet of the State of Israel Bonds and was Chair of the Task Force on Pre-Marital Education of the Central Conference of American Rabbi’s. He is currently on the board of the Jewish National Fund of Cleveland. He has been highly involved in Social Justice issues over the years. In his years with Temple Emanu El, Rabbi Roberts has gained the respect and admiration not only of temple members, but also of colleagues regionally, nationally, and in the State of Israel.

“Getting old is like climbing a mountain; you get a little out of breath, but the view is much better!” Ingrid Bergman “Aging is an extraordinary process where you become the person you always should [Read more…]

On this week’s episode of the Seekers of Meaning TV Show and Podcast, Rabbi Simkha Y. Weintraub, LCSW, retired Rabbinic Director of the Jewish Board of Family and Children’s Services in New York City, discusses [Read more…]