Joining Rabbi Address for a video conversation from his home in Israel is Rabbi Stanley Davids, co-editor (with Rabbi John L. Rosove) of Deepening the Dialogue: Jewish-Americans and Israelis Envisioning the Jewish-Democratic State.

Using the vision embedded in Israel’s Declaration of Independence as a template, this anthology presents a unique and comprehensive dialogue between North American Jews and Israelis about the present and future of the State of Israel.

With each essay published in both Hebrew and English, Deepening the Dialogue is the first of its kind, outlining cultural barriers as well as the immediate need to come together in conversation around the vision of a democratic solution for our nation state.

Watch the conversation in this video player

Listen to the conversation as a podcast 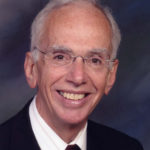 Widely active on the Jewish scene, Rabbi Davids’s most significant commitments have been to ARZA, the Association of Reform Zionists of America, which he served as national chairman from 2004-2008. It was through ARZA that Rabbi Davids founded the Reform Zionist Think Tank, an endeavor that led to the historic adoption of the CCAR’s Reform Zionist Platform (Miami 1997), which among other issues embraced for the first time Aliyah as a Reform Mitzvah. He is Honorary Chairman of the Israel Bonds National Rabbinic Cabinet. Rabbi Davids recently completed more than a decade’s service as an elected member of both the Board of Governors of the Jewish Agency and of the Executive of the World Zionist Organization.

In February 2015, Rabbi Davids was named an Honorary Fellow (Amit Kavod) of the WZO, in appreciation for his many years of distinguished leadership. In May 2016 the Israel Movement of Reform Judaism honored him for his efforts at building bridges between Diaspora Progressive Judaism and the Israeli Reform Movement. He is co-editor of The Fragile Dialogue: New Voices in Liberal Zionism, published by CCAR Press in 2018. He is also the co-editor of Deepening the Dialogue: Jewish-Americans and Israelis Envisioning the Jewish-Democratic State, just published by CCAR Press.

Rabbi Davids served as a member of the Board of Overseers of the Jerusalem campus of the Hebrew Union College for eight years and was recently elected to the Board of Overseers of the HUC/LA campus. Long active with youth, Rabbi Davids was elected an Honorary Member of NFTY. He served as international president of Alpha Epsilon Pi, North America’s only Jewish undergraduate fraternity and received Alpha Epsilon Pi’s highest honor, the Order of the Lion, in 2014.

A congregational rabbi for more than 45 years, Rabbi Davids is Rabbi Emeritus of Temple Emanu-El of Greater Atlanta. Together with his wife, Resa, Rabbi Davids made Aliyah in 2004. In August of 2014 they established their residence in Santa Monica. They have been blessed with three children and eight grandchildren.

Rabbi Richard F. Address, D.Min, is the Founder and Director of www.jewishsacredaging.com. Rabbi Address served for over three decades on staff of the Union for Reform Judaism; first as a Regional Director and then, beginning in 1997, as Founder and Director of the URJ’s Department of Jewish Family Concerns and served as a specialist and consultant for the North American Reform Movement in the areas of family related programming. Rabbi Address was ordained from Hebrew Union College-Jewish Institute of Religion in 1972 and began his rabbinic career in Los Angeles congregations. He also served as a part time rabbi for Beth Hillel in Carmel, NJ while regional director and, after his URJ tenure, served as senior rabbi of Congregation M’kor Shalom in Cherry Hill, NJ from 2011-2014.

“My Million Dollar Mom,” the movie version of Ross Schriftman’s touching memoir of his mother’s battle with Alzheimer’s Disease, is now available on the web. Ross was a guest on the Jewish Sacred Aging BlogTalkRadio [Read more…]